Dubai, United Arab Emirates. A place which couldn’t be more culturally removed from Castlederg if it tried. For example, public displays of affection are very much forbidden. If you’re seen holding your girlfriend’s hand in the street, the authorities will step in. Whereas if you’re seen doing the same in Castlederg, a crowd of teenagers will shout ‘YEEEOOOOO’ out the window of their Honda Civic as they speed by.

Also: in the hotel room if one wants to open the curtains, you don’t simply walk over to the curtains and pull them open yourself like some bog-dwelling savage, no: you press a button on the wall above your bed. It’s a different world, boys.

Anyway, we wake up on our tenth birthday in Dubai. Paddy’s Day 2006, we were playing a once off gig for booze to 40 people. This year it’s 5000 people from all over the world. We were filming a little documentary while we were out there (watch this space for that, it’s being edited at the moment) and apart from being a surefire way to approach exotic women, from our interviews we met people from Brazil, India, The Philippines, all over Europe, Africa, everywhere. All brought together by a desire to celebrate Paddy’s Day, whatever that may have meant to them (it seems to mean ‘drinking’ to most people, so pretty much the same as home). We were thrilled to see the response our music got and just want to thank all of you who danced, bought a CD and took the time to talk to us. 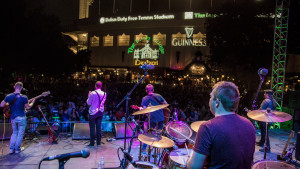 Sign up to receive info on news, releases, tour dates, pre-sales and much more!